WUHAN VIRUS DAILY UPDATE FOR MAY 12

LOWEST DEATHS ON TUESDAY SINCE MARCH 31! Well our Tuesday numbers did pop up as they always do on Tuesdays but not anywhere near as much as they used to. Following another day of record lows, this is the sign we've been waiting for to indicate the curve is finally moving downwards.

How do various regions fare? NY & NJ, with Pennsylvania and Maryland helping, are still the most deadly region. New England seems to have peaked and is in real decline. The Mid-West and South are still trying to round that curve down but their numbers are also already low. Lower still is the West and Southwest who, outside of a few specific areas, would never even have known about Wuhan virus if someone hadn't told them. 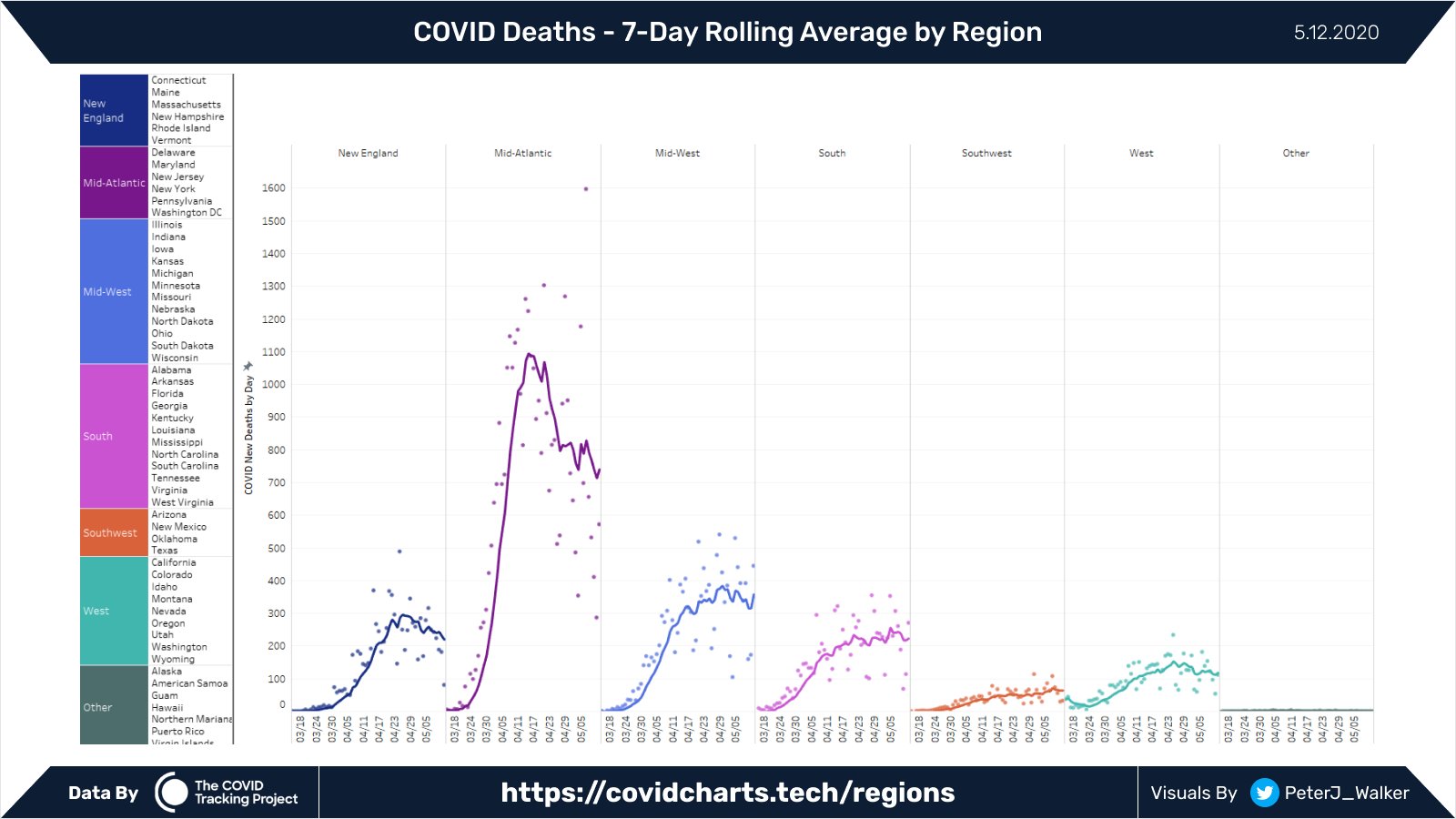 Finally, my friend Mike Dixon found this article about tests being run on BCG vaccine as an inhibitor for Wuhan-virus. There are two double-blind studies going on in Australia - neither of which will even have preliminary results until October and then nothing final until next year. The introduction text is just a bunch of nonsensical double speak. Look at the reasons why, outside of this study, people shouldn't try to get BCG to fight off Wuhan-virus:

"...there are four main reasons why it is very important to adhere to WHO's recommendation that the BCG vaccine is used for COVID-19 only in randomised controlled trials.10 First, the BCG vaccine is already in short supply, and indiscriminate use could jeopardise the supply needed to protect children against tuberculosis in high-risk areas. Second, whether BCG will be effective remains unknown: findings from the ecological studies suggesting less COVID-19 in countries with routine BCG immunisation are weak evidence because they are based on population rather than individual data and are prone to confounding.11 Also, it is unlikely that a BCG vaccine given decades ago in childhood will ameliorate COVID-19 now. One reason for this is that the beneficial off-target effects of the BCG vaccine might be altered by subsequent administration of a different vaccine.1 Third, if the BCG vaccine is not effective against COVID-19, BCG vaccination could engender a false sense of security. Fourth, careful safety monitoring in randomized trials is needed to guard against the remote possibility that up-regulation of immunity by BCG will exacerbate COVID-19 in a minority of patients with severe disease."

Can you believe this? Number one reason is "the BCG vaccine is already in short supply"!!! Well MAKE MORE YOU IDIOTS! The claims of "weak evidence" are complete nonsense as well. These are people conducting a study in order to make a claim of "well - we're studying it" while not taking any responsibility for actually delivering a useful report.

Who made this recommendation that we DON'T use BCG for protection against Wuhan-virus? The WORLD HEALTH ORGANIZATION!! Yet again - another proven safe treatment used by a few billion people that has the highest correlation of protection against Wuhan-virus of EVERY FACTOR THERE IS! Nope - best just leave that alone and not try it. Fauci has something else he's working on that has no impact on mortality that we'd prefer you use in about 12 months.

If you are someone you care about is at-risk because of their age or other immune-compromisation factors - please call your doctor and see about getting BCG vaccine against TB. It could very well save your life.